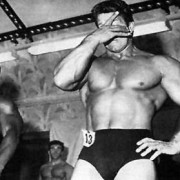 I believe it was in ’52 that I first went to Leeds in Yorkshire, England, to visit with Reg and my sister Marioon. Although they were comparative newly-weds, they welcomed me to stay in their home with open arms. And not only that, I was also offered a job with the Reg Park Magazine and Barbell Company, which of course I accepted with alacrity. How great was that for a young man whose whole life, (at that time), was living and breathing body-building! My duties were helping to get the equipment which we sold, (iron plates and bars), ready for shipment, plus writing articles for the Reg Park magazine. Both were tasks that I truly enjoyed performing. It was a lot of fun too, to accompany Reg all over Yorkshire and Lancashire virtually every weekend to shows where he appeared as the guest posing star .I would sell his magazines and take orders for his equipment, and in so doing I met with many of the top British physique stars and strength athletes of that era. Of course training in those days was a world apart from the sophisticated methods and machines used in present times.

The contemporary machines that we take for granted now weren’t even dreamed about “way back when”! Anyway, after a day’s work, Reg and myself and a couple or three training partners would go upstairs of the very old building that was both the office and warehouse….(I remember the thick old wooden floors and small windows), and, after a minimal warm-up, as we didn’t want to expend too much energy, we’d start that day’s routine. And what I remember basically about that is that it was almost always the maximum poundage we could handle reasonably, ( very little cheating allowed), for the required number of sets and reps. of that particular exercise!
With this approach, we seemed not only to make great gains physically, but also to increase dramatically in strength. What a fantastic experience and inspiration to work out with Reg as mentor and training partner. I recall when Reg was squatting, or bench-pressing, he reminded me of one of those powerful cart-horses I used to see in the old days, pulling unbelievable loads! We didn’t always have the luxury of working out in that warehouse though. There was a time when the only accessible place was an old clapboard garage whose doors didn’t shut, and in winter, after walking a half mile or so, in deep snow, to get there, the gusts would blow in whilst we were training! Talk about fanatics! But it was in that garage that we had some of our best work-outs. I remember we used do “dinky squats” with 1,000 lbs. !!! While the physical accomplishment, not to mention the ego, felt great, it really played havoc on the lower back, as did the bench squats, which we used to perform with around 650 for reps! I think we went a little crazy once in a while just to break the routine!

Volumes have been written about Reg’s physique, and with good reason. For a powerful looking, tremendous proportional shape, he was unparalleled in his day. But I would like to comment on the man’s character from my perspective. When I entered the “Pro. Mr.Universe” in 1958, I had been living in California, training at the original Muscle Beach in Santa Monica. I went to England for a few weeks before the contest, and not only did Reg assist me in my final fine-tuning work-outs, but with my posing routine as well, even though he too was competing that year. As it turned out, two brothers-in-law won their respective height classes, and of course Reg took the over-all title. I don’t get to see Reg as much as I would like to…we are, after all, continents apart, even though he and Marion do visit their son Jon Jon and his children every year in California and we are in Washington State. When we do manage to get together, we always enjoy reminiscing, and I appreciate the insightful remarks Reg has about the present-day “iron game” too! Especially his views on the “steroid scene”, that has so dramatically changed the face of our sport. The impact Reg had when he first exploded on the body-building scene was, to use a modern-day phrase, “totally awesome”, but that charisma remains after fifty -odd years is even more awesome.
All I can say is, “A heart-felt Thank You”, to my BIG brother(in-law). Johnny Isaacs.