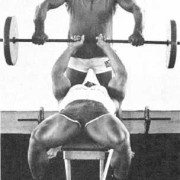 Reg working out “There comes for each one of us a defining moment in our lives. Often, it is the meeting of a person who has a significant and positive impact – a person who influenced us to such an extent that we will never forget them. A person who may have taught us something; a person who may have been a leader, a coach, an achiever … or someone who simply helped us when we really needed help. This person touched our lives – just as we touch the lives of others. For me, that person was Reg Park. But in order to place his influence in perspective, let me first tell you the story of Odysseus.” Odysseus, the legendary King of Ithaca, was the central character in Homer’s epic adventure, The Illiad. Written 4000 years ago, it is a tale of courage, love, adversity and triumph. Most importantly, its underlying theme is all about a devotion to the principle of helping others. Odysseus was not to know when he set out from Ithaca to help the Athenians to capture the City of Troy that he would be away for 20 years. However, on the eve of his departure, he appointed an older, wiser man to provide the environment for the personal development of his infant son Telemachus. This man’s name was Mentor and he formed a relationship with Telemachus which was to influence his life forever. He became a sage advisor, providing honest insight, constructive suggestions and a wealth of information so that over the years, Telemachus could grow to become a king worthy to succeed his father.
Reg Park is a modern day reincarnation of the spirit of Mentor. Throughout his career, which has spanned over 6 decades he has dedicated his life to growing others. Even at his physical peak, which he retained for longer than any other person in his field of achievement, he was willing to share the principles and trade secrets of his profession with others so that they too could aspire to become the greatest. I first met Reg in 1965 when I was 15. Forty years later I still see him regularly in the gym every day. Reg had already won his first title in 1949, the year before I was born and when he came into my life in ’65 he had already notched up 6 international titles, a number of movies (three as Hercules) and recognition as the man with the best physique in the world. Even at that young age, I was so impressed with the way Reg would handle all the requests for advice and assistance which constantly barraged him from so many people. In his gruff and often very direct style he would demonstrate techniques, discuss routines and constantly encourage and motivate. What makes this man remarkable? He has a talent – a talent for making people feel good about themselves! Reg is a natural mentor – a lifelong believer in the discipline of helping others to grow, helping others fulfill their dreams. As a successful businessman, Reg could have stopped working 20 – even 30, years ago. And yet, as he powers his way towards his 80th birthday, he still spends 12, sometimes 13 hours in the gym each day, helping people to improve their physical wellbeing … helping them to reach their dreams of fitness and appearance.

This man is the physical and often spiritual mentor to hundreds of devotees. Still hundreds more wait patiently to get onto his schedule. But back in 1965 I was a new devotee to the gym culture and this is where the real story begins. At the time Reg was mentor and business advisor to Bert Nathan who owned a successful gym in Salisbury of what was then Rhodesia. Reg had allowed Bert to book him for a show with an unknown bodybuilder – a tall Austrian with a huge smile and an unusual name! Now the problem was that the Austrian could not speak a word of English. But Bert was aware of the fact that I spoke German. So I had the pleasure of spending the next two days with Reg and Arnold Schwarzenegger, witnessing the bond of friendship growing between these two remarkable men. But something even more significant happened. Reg adopted Arnold as his protoge and Arnold accepted Reg as his mentor – beginning a relationship which still exists 40 years later! I think it would be true to say that it is through the guidance and mentoring of Reg Park, that Arnold Schwarzenegger made it in his profession. Today, he is the Governor of California!
The other day whilst I was doing lat pull-downs Reg came up behind me, put his hands on my shoulders and said, “You’re wasting unnecessary energy doing them like that!”Hey Reg,” I retorted, “This is the way you taught me 40 years ago!” “You’re right, son,” he said with a big smile, “that’s the way we did do them 40 years ago; but physical technology has changed over the years and I’ve also learned a few things. Move over and let me show you how.” And in this gym crowded with “body-beautifuls” in their designer sweat gear, one 70-something quietly demonstrated to a 50-something, the best way to do the lat pull-down exercise. “Now let’s see you do it,” he said. The point that I want to reinforce is that every one of us has the potential to help someone else to fulfill their potential, to reach their dream – to find their voice. And it’s never too late.
All too often these glorious opportunities simply pass us by – because we’re not paying attention. If we are to find our own voice, we must unswervingly help others to find theirs! Reg Park is a living example of an individual who has transcended physical and mental frontiers to reach a peak of spiritual and emotional maturity which he shares generously with all who come into contact with him.

(Our thanks to Michael Pryke, founder of EQ IMPACT , specialist coaches to others to understand & use the tremendous power of emotional intelligence (EQ) as a source of influence & communication. www.eqimpact.co.za)