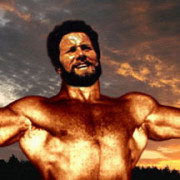 The gate glides open and I drive in. At the front door the beautiful Marion Park is waiting to welcome me with a warm smile. Before I can finish a greeting Reg Park’s chest looms round the corner. About a minute later the rest of him arrives. To say that I would suffice as a dumbbell in his gym would be noting short of a blatant exaggeration, for even at the age of eighty the man could still crush me like a pack of two-minute-noodles.
Wearing a blue gym tracksuit and an enormous smile he invites me in and before I know it I’m utterly captivated by his gracious demeanor.

On very short notice Reg Park agreed to see me, or rather squeeze me in. One would think that an eighty year old man would have plenty of time on his hands, between all the crossword puzzles and waiting for 7 de Laan to begin. But in Reggaes case its rather clients on his hands. Everyday he still spends a solid ten hours training and nurturing individuals who in varying degrees – venerate him. Asked as to whether he is obsessed with body building he throws me a surprise glance and attempts verbally to deny it. That is until Marion informs me that he most certainly is, simultaneously reminding her husband of all the times he used to use the furniture in hotel rooms to work out while on the road.

The story of Reg Park or South Africa’s Hercules is nothing short of an inspiration. He was born in England in 1928 and as a youngster dazzled the crowds from soccer pitches to athletic tracks. That was until one day while playing soccer for the Leeds City Club that a knee injury forced him into a premature retirement from the game. A future in Athletics, needless to say, was also no longer on young Park’s horizon. It was however during his rehabilitation whist browsing through a publication called ‘Health &amp; Strength’, that his impressionable eyes fell upon the then Mr. NYC, and Reg knew exactly what needed to be done. With a sack full of determination and a sack on the floor he began formulating a rudimentary workout routine back at his parents house in Yorkshire.

In 1948, at the age of twenty, he returned home from the army and after seeing the imposing line up of that years Mr. Universe finalists, decided that the title should one day belong to him.
So the sack on the floor was upgraded to a pair of dumbbells, and with layer upon layer of thermal clothing, enduring sub zero temperatures in his parents garden he began working out – seriously. How serious? Serious enough to take the title of Mr. Britain the very next year in 1949. Serious enough to come second in the Mr. Universe the following year, and serious enough to win the coveted Mr. Universe the following year in 1951. After only three years of pumping iron, burning fat and molding the muscle, at the age of 23 he was at the top of world. With a perfect physique and a charisma that could charm tuna out of a can, the world soon fell in love with Reg Park.
The masses have always been easily enamored by beauty. Nowadays all any machine requires to be successful is a pretty face to front it, no matter what detritus the cogs are churning out. Disguise the wares with a fetching aesthetic and the product will fly of the shelves, (the modern day pop scene springs to mind). But looking at Reg Park it is refreshing to know that he was the real deal. He was the machine, he was the cog, he was the face, and as an added bonus he had and still has a personality.

The following years were spent touring the world and selling out show after show, marrying his wife Marion and having a daughter Jeunesse and a son Jon-Jon.
Marion, who was a ballet dancer at the time, was the one who opened the eyes of Reg and the muscle world to music. At the time a bodybuilder’s routine on stage consisted of an uninterrupted succession of uncomfortable poses, all bitterly accompanied by silence. Marion introduced Reg to an operatic composition they both believed would compliment the sport and began choreographing at home. The first time they exhibited their new inclusion on stage there was no looking back and the sport was immediately postured toward the one we know today.

It was only seven years later, after a guest appearance at the Mr. Universe in 1957, that he decided to do what nobody had done before or even consider possible – raise the Mr. Universe trophy above his head for the second time. In 1958 he entered the arena again and walked home with the title that was unequivocally his.
‘My birthday is on the 7th of June, so seven has always been a lucky number to me.’ Came the response when asked why he waited seven years to reclaim the title, and for anyone who mocks the concept of having a lucky number, seven years later he took the title for a third time.
His list of awards reads like that of a successful football teams, a team that dominated every game played from 1946 to 1973. Now that’s staying power in anyone’s book. Even more so when considering that not an iota of anything resembling a steroid was ever consumed.
‘It just never made sense to me to even think about using them, either you do it properly or you don’t do it at all. And all they guys that use steroids look terrible, you can tell immediately it’s not natural.’ Reg says as he recounts the days when the drugs first started doing the rounds. ‘It was a coach from Germany that first brought them in, and a coach is supposed to have his athletes best interest in mind. Then they started introducing masking agents to cover up the use of steroids, but those didn’t always work so well. I remember one contest in Chicago where the guys were given six months advance warning that they were going to be tested at the event. Even after that seven of them tested positive. It amazed me that one guy blamed his masking agent for not working. It never even occurred to him to maybe blame himself.’

As a child Reg was enamored by a picture of a young Greek couple that he saw somewhere in a magazine. The man in the picture was the one who made the greatest impact, but based upon the fact that he is still happily married and the father of two – it wasn’t a rear end impact. Years later he was to have that same effect on many a pubescent and teenager alike, by entering the world of film. With an anatomy personifying immortality he graced the screens in 1961 by playing the critically acclaimed role of Hercules in two features shot in succession, Ercole alla conquista di Atlantide and Ercole al centro della terra. Working with two intellectually acclaimed directors, Vittorio Cottafavi and Mario Bava, unwittingly transformed Reg into a cult personality within the classic Italian Genre. Three more movies were to follow, all solidifying the Mr. Universe as the paragon of Hellenic heroes. The silver screen introduced the 225 pounds of muscle to a whole new audience, and although his acting career was short lived his legend as Hercules still lives on. The last time I ventured a word with the Greek Gods it was rumored they were all in favor of making Reg Park a demigod with full privileges in the after life.

One of those young whippersnappers to be forever entranced by what he saw on screen was none other than the now Governor of California, Arnold Schwarzenagger. Shortly after my arrival at the Reg Park home,I was handed a letter from ‘The Governor’, thanking Reg and Marion, for their friendship and wishing them both well for the future. Not a bad pen pal to have on anyone’s list
‘Once a year I used to bring the top guy in the world out to South Africa for a couple of shows, and on my one trip overseas I met Arnold at a function somewhere.’ Reg recalls gleefully. ‘He asked me, if he won the Mr. Universe would I consider bringing him out. I said sure no problem. The next year he won it and a couple of weeks later I received a telegram reminding me of what we had spoken about. So I sent him a ticket and over he came.’
The 19 year old Scharzenagger spent a full three months living, training and performing with his mentor all over South Africa, and it was during this time that a friendship based on respect, admiration and the pure love of body building was forged. Turns out the muscle man turned actor turned politician knew even back then that politics would be one of his future arenas.
‘All the guys in the gym used to laugh at him and say what does he know about politics. I used to respond by saying what does anyone know about politics. Politics is about surrounding yourself with the right people and that was something Arnold was really good at, he was also brilliant at handling tricky situations and people. So I wasn’t at all surprised when he said he was going into politics, I kind of expected it.’ Reg recalls.
‘He also had a crush on Jeunesse when he was here.’ Marion slides in, painting a more holistic picture of the man.
Over the years their involvement in each others lives has been continuous with Reg being the annually MC at the Mr. Olympia Contest that Arnold would orchestrate in the states.
‘When Arnold won it for the first time he got $1000. Now he gives the winner over $100 000, a Rolex and a Hummer.’ Reg says just to inform me how times have changed.
Times may have changed but the heart and thinking of Reg Park has not.
The lyrics of David Kramer’s ‘Blokkies Joubert’ slip into my mind.

‘It’s hard to believe this is blokkies Joubert,
A hooker in the Springbok scrum.
Because his old and gray and he sits in his chair,
in the slanting winter sun.

Reg park is not an effigy withering away in a rocking chair. He is not a shadow from the past that we as South Africans should allow to slip into our rearview mirrors as we turn new corners. He is a legend, and the best part is that he is a living legend.
I ask him how it feels to be getting old and I immediately and instinctively regret it.
‘I’m not getting old.’ He declares vehemently. ‘I’m getting older, your’e only as old as your mind allows you to be.’ He says with one of his large digits tapping his temple and a look in his eye that shouts – this marathon is far from run.

A statement heard by many of us from many of our elders, but a statement which carries a little more weight when spoken by a man of eighty who is still rocking and rolling with the best of us.
I end this article with a warning to any potential geriatric mugger out there. Be careful who you try and mug, because it just might be Reg Park.

Training with my BIG Brother(-in law)
Scroll to top