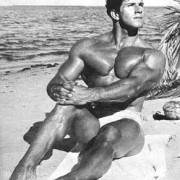 By Lou Ravelle
(Reprinted with permission of Steve Gardener/Muscle Mob)

The End of the Beginning.
In this third and final part of this Reg Park Trilogy we see Reg firmly planted on the ladder of success
The old Scala Theatre no longer exists but it had a long and distinguished career in Charlotte Street, which runs parallel to London’s Tottenham Court Road on its West side. The theatre was a scaled down version of the famous La Scala in Milan and many a world famous star has graced its boards. I doubt if ever in its long history it had hosted a more vociferous audience than on the evening of September the 1st 1951, when NABBA President D. G. Johnson took he microphone and announced, “Ladies and Gentlemen, I give you Mr. Universe 1951 – REG PARK of England!” The theatre erupted as if struck by an atomic shock wave.
Reg’s winning had broken the American monopoly on the title and as his reception proved that it was something to shout about. The pre-judging, which was again done in the Royal Hotel, had taken three hours as the panel of seven judges had scrutinized and appraised each of the 43 competitors, who came from various parts of the world. In some cases an individual assessment lasted up to five minutes.
This year the organizers had decided to have three height classes instead of four as in the previous year. The result was that class 1, the big men’s class was for men of 5ft 9ins and above Class 2 included men from 5ft 6ins to under 5 ft 9ins Class 3 was for men below 5 ft 6ins.
The panel of judges was made up as follows:
George Greenwood and Bill Archer (England)
K.D.Arax and Lucien Besset (France)
P.E Creaye (Belgium)
Alexandre Carali (Egypt)
Bishnu Ghosh (India)
At the end of the pre-judging the judges were each asked to write on a sheet of paper of their first and second placing for the overall winner. Six out of the seven judges had Reg Park down for the supreme title.
Again, as in the previous year it was case of all eyes on Class 1. It is generally acknowledged in bodybuilding that a good big ‘un will always beat a good little ‘un. It would have been a very good little ‘un that could have stood up against this night’s Class 1 Beef Trust. Reg Park, Oscar Heidenstam, John Lees, Hubert Thomas and Robert Duranton, the French star, were all in top shape and a last-minute surprise entry from the United States and also in Class 1 was publisher Joe Weider.
Eyebrows were raised when it was known that the high-powered muscle mag magnate was himself taking to the posing plinth. Still, the ‘Master Blaster’ gave a good account of himself. He placed fifth out of the twelve men in Class 1! The short men’s class was dominated by two Indian personalities Monohar Aich (2nd) and Monotosh Roy (1st). Roy brought great drama to the show when, after his normal posing routine he did a death-defying act in which he apparently impaled himself upon a nasty-looking dagger. The dagger was fixed to the end of a long rod, so that it looked like a spear. The point of the knife was placed just below his Adam’s Apple and with a dramatic lunging movement Roy thrust his full weight upon it. The rod bent under the pressure, but Roy emerged laughing.
Also worthy of special mention was the ever-popular Juan Ferrero of Spain. Though he couldn’t speak a word of English this fine athlete’s personality got through to everyone who came into contact with him. Ferrero found himself in a unique position that night. He was now a Universe winner in two height classes. This year he had won class 2 and the previous year he had won Class 3. Obviously this phenomenon was a result of the ‘goal post juggling’ that had taken place in the height classes at the 1950 show. (See previous article). The bodybuilding world mourned the loss of a great character when, in 1958 Ferrero was killed in a car accident.
Reg Park was a young man of 23 when he won the Universe title. He was by no means at his peak, either in strength or development. He was looking ahead; there were fresh fields to conquer. Reg’s victory had broken the myth that the USA had the monopoly on the world’s best physiques. The modest Yorkshire lad had proved that Britain could make’em too. Not surprising then, that his winning the coveted title started an upsurge in bodybuilding activity in Britain.
All in all, the ’51 Universe was a great and memorable occasion. At the time I heard several people say that they wouldn’t forget it as long as they wouldn’t lived-I certainly haven’t.
Below is the final score card for the night.
Mr. Universe Contest 1951
MR UNIVERSE – REG PARK
Class 1 (over 5ft 9ins)
1.. Reg Park(England)
2.. Equal Seconds, Robert Duranton (France) and Oscar Heidenstam (England)
1.. Hubert Thomas (Wales)
2.. Joe Weider (USA)
3.. Arnold Dyson (England)
Class 2 (over 5ft 6ins and not more than 5ft 9ins)
1.. Juan Ferrero (Spain)
2.. Mario Marello (France)
3.. Robert Jama(France)
4.. Spencer Churchill (England)
5.. August Marcel (France)
6.. Johnny Stringer (England)
Class 3 (under 5ft 6ins)
1.. Monotosh Roy (India)
2.. Monohar Aich (India)
3.. Guy Marello (France)
4.. Johnny Roubalos (Greece)
5.. Jim Laurie (Scotland)
6.. Wally Wright (England)

The Mr. Universe title has now existed for over half a century and for many bodybuilders and winning of this prestigious award has been the ultimate goal. When Reg was crowned Mr. Universe it was, for him, just the end of the beginning. Like other champions before and after him, Reg found that he had a career waiting for him in films. He made several films before settling down as a very successful gym operator in South Africa. His most memorable part was the title role in Hercules and the Conquest of Atlantis. Others have played this role in various films but for sheer muscular bulk and power Reg’s Hercules has never been equaled. In the 1952 it was decided to have amateur and a professional class in the Mr. Universe the first year’s title being won by Juan Ferroro. Reg won the new pro title twice. First in 1958 and then again in 1965.This last made a triple Universe winner. Always a completely natural bodybuilder Reg Park was an inspiration to millions including the great Arnold Schwarzenegger. Reg was also bodybuilder who had Titanic strength to match his great musculature.
In 1954 his 500 lb bench press was the first-ever in Europe and he had thus equaled the standard set by the much heavier Doug Hepburn who was at that time world weightlifting champion. As in all sports, with the passing of time standards have gone higher but even today 500lb is a pretty awesome weight. Reg also joined that select band (which now includes publisher Steve Gardener) who have lifted the famous Thomas Inch dumbbell. He also made short work of Inch’s equally formidable expander. In 1953 he broke the longstanding British Dumbbell record with a lift of 258 lbs. His training poundage’s were staggering:
a.. Incline and flat Bench Presses with a pair of 185 lb dumbbells.
b.. Sets of Squats with 510 lbs. Singe repSequat – 600lbs.
c.. Press Behind Neck 300 lbs.
d.. Alternate D.B. presses with a pair of 120’s
Reg is now in his 73rd year. Still living in South Africa, with his wife Mareon, he’s still in there, pitching and spreading the gospel. Reg is at present working 14 or 15 hours a day as a personal trainer. He says he really enjoys this one on one coaching and regrets that he didn’t get into it earlier. Wot a geezer!

Reg Park – A Hercules for Our Time
Scroll to top