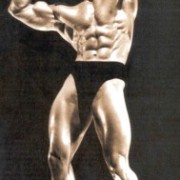 A classic Reg Park pose Reg Park was one of the greatest bodybuilders Britain ever . Until Reg appeared on the scene, as far as international standards were concerned, the British were “also rans.” Reg was the first British bodybuilder to compare with, compete with, and finally surpass the long time American champions.
Reg Park won the NABBA Mr. Universe title three times in 1951, 1958 and 1965 – an outstanding achievement for anyone. No one could rival Park in the early 60’s. He developed muscle size not seen before him, with sharp definition and muscularity. With the Park physique, we entered a new era, moving from bulk alone to a realization of what refined development could really look like.
He established training instructional courses and became a leading figure in British and world bodybuilding long before he moved onto the silver screen. A shrewd businessman, Reg used his earnings to firmly establish himself in South Africa with a chain of gyms that have had a profound effect in producing some of the most superlative physiques in that part of the world. It is not saying too much to acknowledge that Reg brought physical development to a new high by his work.
Today, Reg is retired from the gym business, having sold all of his health clubs. Reg still does one on one training in South Africa. I caught up with Reg in Santa Monica when he was visiting with his son Jon-Jon and his family for Christmas. What follows is an interview with one of the true gentlemen of the sport, Reg Park. I hope you enjoy it…

IM: In 1970 you entered the NABBA Mr. Universe in London and did quite well…
Reg: 1970 was kind of a missed year. I was very busy with my business. We opened three more gyms and I was too busy to train properly. I placed second to Arnold Schwarzenegger in the Tall Men’s Class and I defeated Dave Draper who placed a close third. Arnold went on to win the overall Professional Mr. Universe. I must say that Arnold looked fantastic and was the better man on that day.
IM: What did you do different for the 1971 Mr. Universe contest? Reg: Bill Pearl announced his intentions of entering the 1971 Mr. Universe along with Arnold and Oliva, so I wanted to be in my best condition. I decided to experiment with my physique and erroneously reduced my bodyweight to 216 pounds. This proved to be my downfall, because my two main competitors, Pearl and Oliva, both were over 230 pounds (Arnold did not enter). I placed third in class I, which was won by Bill Pearl with Oliva coming in second. Pearl went on to win the 1971 Overall Professional Mr. Universe.
IM: Did you enter any more Mr. Universe contests?
Reg: Yes. In 1973, I entered the NABBA Professional Mr. Universe. I came in second in Class I behind Dennis Tinerino. Boyer Coe (Class II) was the overall winner. After that, I retired from all physique competitions.
IM: What type of routines did you use in 1973?
Reg: I trained six days a week, around 2 hours per workout, two body parts daily.
First Day
Deltoids
– Seated High Incline Dumbbell Press 5 Sets, 5 Reps
– Seated High Incline Dumbbell Press 5 Sets, 5 Reps
– Lying Face Down on Bench Lateral 5 Sets, 8 Reps
Triceps
– Pulley Pushdowns 5 Sets, 8 Reps
– Lying Tricep Z-Bar Extensions 5 Sets, 8 Reps
– Decline Z-Bar Tricep Extensions 5 Sets, 8 Reps
– Lying Face Down on Bench Pulley Push Out 5 Sets, 8 Reps
– Standing Extensions with Floor Pulley 5 Sets, 8 Reps
Second Day
Back
– Chins 5 Sets, 8 Reps
– Seated Pulley Pulldowns Behind Neck 5 Sets, 8-10 Re
ps – Seated Pulley Pull-Ins to Waist 5 Sets, 10 Reps
– Seated Pulley with floor Pulley 5 Sets, 8 Reps
Biceps
– One Arm Seated Dumbbell Curls 5 Sets, 8 Reps
– Preacher Curls 5 Sets, 8 Reps
– Lying Flat On Bench Curls 5 Sets, 8 Reps
– Incline Dumbbell Curls 5 Sets, 8 Reps
Third Day
Thighs
– Leg Press 5 Sets, 5 Reps
– Hack Squat with Machine 5 Sets, 8 Reps
– Hack Squat with weight on belt Behind Back 5 Sets, 8 Reps
Calves
– Standing Calf Raises 5 Sets, 20 reps
– Seated Calf Raises 5 Sets, 20 reps
Abdominals
– Leg Raised hanging from Chinning Bar
– Ordinary Leg Raises
– Leg Raises on High Bench
– Twists on a Swivel Machine
– (All of the above exercises were 3-5 Sets of 30-40 reps.)
IM: How do you train today?
Reg: I train six to seven days per week for about 1 1/4 hours in the early morning, usually between 6-8 AM. I still weigh around 225 pounds.

IM: If you were starting over again, would you make any changes? Reg: I would aim to be number one and even with today’s physiques, I know that I could beat them all without drugs.
IM: What is your opinion of the current trend of drug taking, especially in bodybuilding?
Reg: I think that those who sell drugs to young bodybuilders, especially female bodybuilders should be jailed for life and the key should be thrown away. Youngsters who are taking drugs are advised to stop at once. The full effects are not known, but those that are, and the deaths that have resulted should say enough. It is not only the quality of the mind and body at age twenty that you should consider, but also how you’ll function at seventy-five. I feel very sorry for the present generation of bodybuilders today because the athleticism is secondary, nutrition is tertiary and chemistry is everything. IM: If you could give just one piece of advice to newcomers, what would it be? Reg: Enjoy your training, enjoy your life. Pick a good partner, not just for training, but for life.