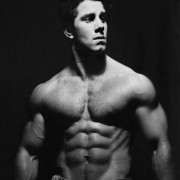 As a high school sophomore in 1964, I was well into my second year of weight training. But it was an article in the April’s Muscular Development magazine, entitled ‘Developing Herculean Muscles’ by Reg Park that caught my fascination about bodybuilding potential. The article contained many pictures of Reg, but it was the impressive front lat spread photo of him backstage at the ’63 Mr. Universe Contest (as a guest poser) that certainly raised my blood pressure. My God! This man was gigantic! I couldn’t believe my eyes. From that point, my library of muscle magazines with articles written by or about Reg has grown substantially. Immediately employing what I was reading, I adopted his famous 5X5 training system and quickly became bigger and stronger. Thanks to Reg, my training became a part of my life and not just a way to keep fit. Because Reg lived so far away (South Africa), I figured never would I ever get to meet my great inspiration. Well fast forward to 1998 when I’m 50 years old, still in the iron game, but now I’m a husband, homeowner, and father. As fate would have it, on short notice I heard about a 50th Anniversary NABBA Mr. Universe Dinner being celebrated in Birmingham, England. All of the previous Mr Universe winners were scheduled to be there – Steve Reeves, John Grimek, Bill Pearl, Mickey Hargitay, and of course, Reg Park. I had previously met Reeves and Grimek on several occasions, both of whom are great champions, and people I’ve always had the highest admiration for. But I had never met Reg Park, my true motivation and the reason why I stayed with serious training all these years. So faced with the high probability of this being the only time to meet him, I called my wife from work and said ‘How about a weekend in England?’ Within a week we were enjoying the English dinner cuisine, Mr. Universe style. Following the dinner, I introduced myself to the person I had admired for the last 34 years. And to no surprise, he was everything I imagined – very gracious, very polite, and exceptionally accommodating to both my wife and me and the many seeking his autograph. After he signed a few things for me, he generously posed for a few group and individual photos. Physically, he looked like he was about to bust through his suit every time he moved. He looked great and naturally I was both impressed and in awe of him. A finer man does not exist. How lucky I was to meet him. Joe Matrisciano
USA (Our thanks to Joe Matrisciano for his article. Thank you Joe for all your support of and interest in The Reg Park ‘ The Legend website)

What Reg Park Did For Me
Scroll to top