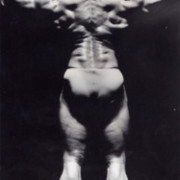 I first heard of Reg back in the late 1970s after reading Arnold’s book: “The Education of a Bodybuilder.” He was impressive, but not as much, until I saw other books and photos of him.

I always admired the Steve Reeves’ physique, but feel that Reg was in better condition for the Mr. Universe face-off. Reeves won and that’s history, but Reg was impressive, nonetheless. I began to read about him and study his courses and career.

The fact, that he claims to be 100% steroid free shocked me, as he obtained the type of development that I thought only a steroid user could possess.

He was equally as strong and again very impressive for a drug-free athlete. I’ve seen his movies and though Reeves was a classic in beauty and proportion, Reg was truly Herculean. The “Reg Park Journal” and his chain of gyms helped to spread the word of fitness to the masses.

Bodybuilding was considered an outcast activity back then and has now become somewhat of a norm in today’s society. Bodybuilding is still an outcast sport, because of its extreme development.

I understand that he is not well and my thoughts and prayers go out to him and his family for a speedy recovery and long life!

A Tribute By Lonnie Teper
Scroll to top