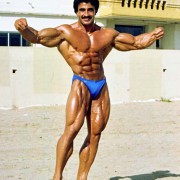 No doubt, Reg Park is one of the most important figures in bodybuilding and he is among the greatest Mass with Class champions (he had a Beautiful physique). I am personally glad to have known him on a personal level. I spent some time with him and his lovely wife on Bondi beach during the 1980 Mr. Olympia in Australia.

He is a great motivator and he had advised me several times when he visited World Gym in Los Angeles. I became a very close friend with his son Jon Jon who is a great swimming champion and perhaps the best personal trainer in all of Los Angeles. Jon Jon is a carbon copy of his father.

Reg in my opinion is one of the 10 greatest bodybuilders of all time and the equivalent of the great Steve Reeves.

I’m honored to have known him and I wish him the best of health,

A Tribute By Clarence Bass
Scroll to top