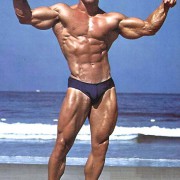 Reg Park inspires us all, not only with his amazing physique but also his character. Reg is a man devoted to his family who also managed to be a great businessman with a chain of gyms, a bodybuilding magazine and a stint as a movie actor. Reg is, to sum it up, a well rounded, multi-talented Renaissance man.

I only was around Reg once. It was at an after-Olympia party in the late ’70s. Reg had that movie star quality, a handsome guy with charisma. Even his speech was impeccable with a strong voice, speaking Standard English in a dignified manner. I suppose if I were asked to sum up my impression of Reg Park in a single word it would be CLASS! Long live Reg Park!

A Tribute By Bill Dobbins
Scroll to top