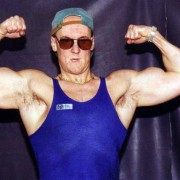 What else can really be stated regarding the great Reg Park? His bodybuilding career, which spanned four decades and included three Mr. Universe titles, speaks volumes for itself. His amazing look landed him in the movies where he inspired many young bodybuilders including a future Governor of California. Driven by heavy workouts and often a gallon of milk and a dozen eggs daily, Reg’s rugged, powerful, and proportioned physique was held for years as one of the sport’s “ideals.”

A Tribute By David Rylah
Scroll to top