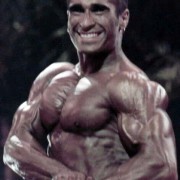 Reg Park was known for his powerful physique. His development was years ahead of his time. Reg Park was one of Joe Weider’s earliest iron heroes. He appeared several times in Joe’s earliest publication, Muscle Builder. Reg was known as one of the strongest bodybuilders of his day. He is also given credit by bodybuilding icon, Arnold Schwarzenegger, as one of his inspirations and role models in the iron game.

A Tribute By Boyer Coe
Scroll to top