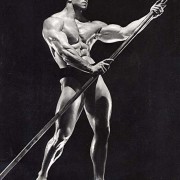 I caught the iron bug in my early teens mainly due to John Grimek, Steve Reeves, and Reg Park. Reeves represented the ultimate aesthetic bodybuilder, and Grimek the more massive bodybuilder and Olympic lifter. But Reg Park impressed me the most because he was not only a bodybuilding great, but in my mind he was also one of the early pre-power lifting greats as he handled massive poundage’s (for that time) in both the squat and bench press.

And he impressed me even more when I finally met him, many years past his prime, but still with the strength and physique, drive and determination, and graciousness that have made him a role model and an inspiration to bodybuilders all over the world for more than half a century.

A Tribute By John DeFendis
Scroll to top