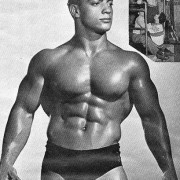 I [will] tell you who was one of the strongest men I worked out with: Reg Park. Oh, he was great. He was one of the few guys who could keep up with me. Reg came on a visit to New York City and he came up to the gym. He was a beautifully built man and he weighed about 235 pounds. And he was using the weights that I was using and I would even say he was a stronger squatter than I was.

He was keeping up with virtually everything I did except maybe in certain categories. But generally he was tremendous. Reg is a very fine gentleman also. It was one of the high points of my training (training with Reg). We worked out for a couple of weeks together. He was just great to work out with.

Reg Park was a gentleman (when I met him). He was soft-spoken and he wasn’t in any way stuck-up. He just was a regular fellow – a regular, okay guy. That’s all I can say.

Marvin Eder
Bodybuilding and weightlifting legend and pound for pound world’s strongest lifter in his era.

A Tribute By Kellie Everts
Scroll to top