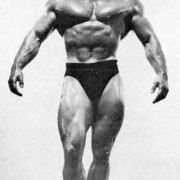 Arnold Schwarzenegger’s hero, both on and off the bodybuilding platform, was Reg Park – do we need to say more? Reg is obviously one of the greatest bodybuilder’s of all time–what long time followers of the sport didn’t marvel at his physique? But what impressed the Governator as much as Park’s muscles was the class he carried with him 24 hours a day – a wonderful physical specimen who cherished his family more than anything in the world.

I first met Reg in person when I began writing for John Balik and IRON MAN Magazine over 20 years ago; John called me and said Reg would be in town on the weekend, and asked if I would like to interview the living legend. That’s tantamount to asking me if I’d like to find a cure for male pattern baldness!

The three of us met at an eatery on Main Street in Santa Monica; it was hard concentrating on the right questions to ask, being in such awe of my subject. He had it all–looks, body, personality, grace. It was easy to see why the Governator fell under the Park spell at an early age.

I sat at the same table with Reg and his lovely wife, Marion at the post contest banquet after the Arnold Classic this year; I didn’t know Reg was ill at the time and now, after hearing of his failing health, feel fortunate that I got to be so close to such a great man in the course of his wonderful, inspiring life.

A Tribute By Dennis Tinerino
Scroll to top