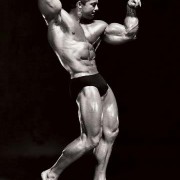 You almost have to be a fan to even know the feeling of awe, gratitude and appreciation that comes from being able to write about your hero. Just to mention Reg’s name takes me back to my beginning bodybuilding days and the many hours I spent lying on my bed while gazing up at the bodybuilders I had taped to my ceiling.

Reg stood out for his incredible thickness and impossible chest. The picture I had of Reg was a side chest pose holding an oar next to a swimming pool. He glowed with the essence of size, strength and filled my thumping little heart with faith. I never hoped to achieve even close to what Reg accomplished… but if I could just add some size… Reg’s massive size assured me I could.

To have been privileged to journey to his home and meet Reg and his charming wife Marion and their children just added frosting to the cake.

Thank you Reg for all the inspiration I gained from you. I’m flattered that any thing I might say could be considered in paying tribute to you.

A Tribute By Greg Sushinsky
Scroll to top