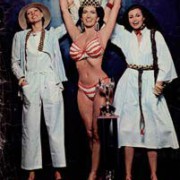 Reg Park got my attention; he is a real dimensional man – there are many facets to him.

He had a beautiful home in South Africa, big pool and all, and Arnold was impressed – wanted to be like him, to have what he had. Later Arnold said he ‘psyched out’ Mr. Park by chatting before a contest and when Reg noted “the contest,” and that they should not chat so much before it. Arnold said, “What contest?” meaning it was a cinch for him. I felt Mr. Park was a gentleman while Arnold was not. I do believe in competition, but not in mowing people down. To me friendships are more important than trophies.

I recall Reg Park saying what a wonderful wife he has, an ex ballerina, and she makes delightful meals and always puts a fresh flower like a rose in the middle of the table. A man who notices such details and tells others about his lovely wife, this is a sensitive man, he is not the ordinary Joe Blow.

He was physically a super handsome man, so being a woman, of course, I noticed him.

A Tribute By Bill Grant
Scroll to top