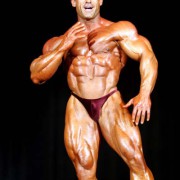 I met with Reg Park in 1987 during the Amateur World Bodybuilding Championships in Madrid. Then I saw him again in Johannesburg in 1991 during the Mr. South Africa, where the promoter of the competition, Mike Jacobs, invited me to Guest pose. At this contest Reg was the Master of ceremonies.

What I didn’t know is that Reg influenced Mike to choose me out of all the Mr. Olympia contenders who competed in Chicago in 1990 to come to South Africa.

Because of those circumstances my life changed, in fact during my stay in Johannesburg I met Adele the woman who share my life today and with whom I live the best part of my life

Also I would like to thank Reg and wish him the best recovery.

Calling All Fans to Submit Memorabilia
Scroll to top