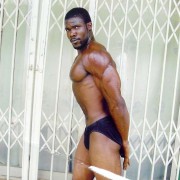 His winning Mr. Britain and the amateur and pro Mr. Universe’s has helped motivate me whenever I am training for competition.

He is a man of focus, activeness, and readiness, and also his determination of spirit not only worked for the Governor Arnold Schwarzenegger alone, but also for me whenever I am discouraged by the situation around me. Also his humbleness and generosity remain undeletable in my memory.

Mr. Park, you remain a bodybuilding legend. Much love.

A Tribute by Marvin Eder
Scroll to top