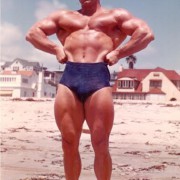 Reg Park was a trendsetter. I know when I started in bodybuilding, it was an odd thing in the mid 1970’s, and people would often make fun of me or say things that we degrading. I can’t imagine guys like Reg Park and what they had to go through. Arnold inspired me and Reg inspired Arnold, it is that simple.

Today we have lots of things that make us bigger and stronger than Reg ever had. People look at guys like Reg and never stop and think about the kind of body he built using the simple things available at that time. He didn’t have much of the help that we have today.

Stop for one minute and think about that, have some respect for those who paved the way. Guys like you and I are sheep following the flock, just imitating what guys like Reg and Arnold did. Can you imagine that there never would have been a Conan, Terminator, or the honorable Governor of California by Arnold if it weren’t for Reg.

Stop and say a prayer for him and his family. I usually see Reg every year at the Arnold and it will be a sad day if we don’t have him next year. He is a legend, He was a pioneer, He was a champion, He is Reg Park.

A Tribute By Larry Scott
Scroll to top