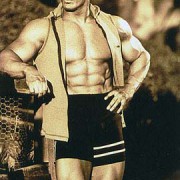 When you meet Reg Park in person, you understand why Arnold Schwarzenegger chose him as his idol and the person he wanted to pattern his life after. Reg is a Bodybuilder’s Bodybuilder.

He is a big man, even at 79 years old, and he carries himself in a regal manner. Not pompous or arrogant in any way, just as a man who respects himself and others. Bodybuilders of Reg’s era, like Bill Pearl, John Grimek and Steve Reeves, exude class and grace. They are humble but proud and they treat others with the same dignity and respect they would expect in return.

Reg was a giant in the bodybuilding world when he was winning the Mr. Universe contest. He went on to parlay that success onstage to a film career where he played Hercules and a successful gym empire that he ran with his beautiful family. Reg Park is an inspiration to bodybuilders all over the world. He is a Man’s Man and a Bodybuilder’s Bodybuilder and I wish there were more like him in our present day society.

A Tribute By Dave Hawk
Scroll to top