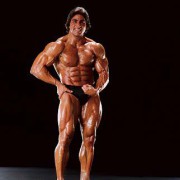 Reg Park is a Physique legend. His massive, muscular Herculean physique with good looks was the first of his era. Also a first is when he starred in many Hercules movies. Also a first was the superhuman strength and unique workouts that he established.

I first met Reg when I was 17 years of age and he personally took time to encourage me, motivate me and even go through his posing routine. This bigger than life character was one of my heroes. He inspired me to follow in his footsteps.

He has had great success, as a family man, movie star and businessman. His legacy will continue to motivate multitudes. I consider it an honor to have known Reg personally and can call him and his family personal friends.

A Tribute By Frank Zane
Scroll to top