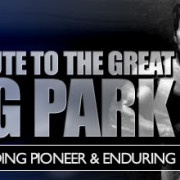 Listing the men who have truly attained bodybuilding immortality through their achievements as athletes of phenomenal physical development, strength training revolutionaries and as men of character, integrity and will, is a relatively easy task if you can count to five.

Reg Park is one such man who most people would agree deserves, along with John Grimek, Steve Reeves, Arnold Schwarzenegger, and Bill Pearl, legendary status for his enduring contributions to bodybuilding. Like his iron counterparts, Reg Park has become a champion whose legacy will endure long after he is gone, such is the impact he had, and continues to have, on masses of bodybuilders and fitness enthusiasts worldwide.

In a sport where there are and have been so many great competitors who have shone in certain areas, few men have shown the kind of all-round ability to connect with the general and the bodybuilding public, while building a reputation as being one of the nicest yet most fiercely competitive men ever to step onto a posing dais, that Reg Park has.

An often-debated point in sporting circles is, “What makes a champion a champion?” The anatomy of a bodybuilding champion is indeed a complex thing to determine, as it is multifaceted and includes both superficial and not so obvious qualities.

Clearly a great physique is one quality, but if tremendous physical development were the sole criteria for champion status, bodybuilding’s evolution would be marked with hundreds of Reg Park and Arnold Schwarzenegger clones.

As we know, this definitely is not the case. No, along with physical development the enduring champion must have something else, further qualities that stick in one’s memory and mark this competitor as being revolutionary, a trendsetter among trendsetters.

If you look closely at the achievements of the aforementioned men, it is clear they were able to capitalize on their physical success in a multitude of ways. Several became famous actors and entertainers, sporting record setters and noted authors and all became health and fitness experts and bodybuilding pioneers. All were also widely respected and, at one point in their careers, the epitome of bodybuilding greatness. In Reg Park’s case, he became all of these things and more.

A champion’s human, more attitudinal qualities are often their biggest asset. Charisma, charm, determination, character, humility, consistency, strength of mind and sincerity are words that are often used to describe the type of person Reg Park is. Many of bodybuilding’s greats, including Arnold, have openly said that Reg, as a man of muscle and as a human being, helped inspire them to achieve at the highest level. 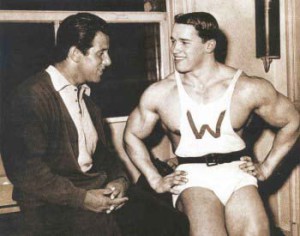 Reg With A Young Arnold

As a man of strength, Reg was noted as being without peer and many people feel he was the strongest bodybuilder of his time. His physique, a perfect combination of John Grimek’s ruggedness and Steve Reeve’s beautiful symmetry and proportion, demonstrated an ability to intelligently sculpt his body. Perfectly balanced, no body part was lacking on the Reg Park physique.

Reg Park began his illustrious bodybuilding career by winning the 1949 Mr. Britain, despite training in conditions that would dissuade the average gym-goer. Such was Reg’s determination he often trained outside in his parent’s garden in sub-zero temperatures with nothing but a pair of heavy dumbbells, a lot of heart, and layers of thermal clothing. Yet he made tremendous progress. No fancy gyms for Reg Park, just yet.

But bodybuilding was not Reg Park’s first love. In fact, the physique world may have lost Reg to soccer had it not been for an injury that sidelined the young player. While rehabbing his injury, Reg discovered a copy of Strength and Health, a magazine he himself would appear in many times, and from then on soccer balls made way for barbells and bodybuilding has been all the more richer since.

Shortly after his first contest, Reg journeyed to the U.S where he spent six months pounding the iron, during which time he met with top trainer and magazine publisher, Joe Weider. So impressed with Reg was Joe that the Englishman was regularly featured in the “Master Blaster’s” magazines and given the publicity necessary to make a major impact on the international bodybuilding scene.

This impact was first seen when, in 1950, Reg placed a very controversial second to the popular Steve Reeves at the NABBA Amateur Mr. Universe. However, the following year Reg won this title at the tender age of 23, after only three years of total bodybuilding training. 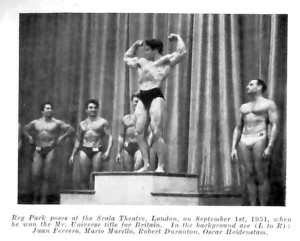 At six foot one and between 220 and 250 pounds, Reg was one of the first “big” bodybuilders and his massive size, and acting talent, was not lost on action film producers who signed him to appear in several films from 1963 through 1965, four of these being the Hercules movies for which his powerful physique was perfectly suited. 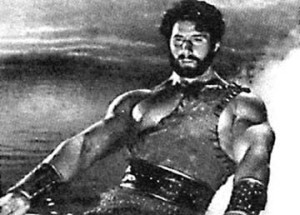 Since the 1960s Reg has lived with his wife Marion in South African where he has continued to inspire bodybuilders and fitness enthusiasts through his expert training guidance. Much of Reg Park’s life has been spent traveling the world preforming strength feats and guest posing. On such occasions he would take his wife and his children, son Jon Jon and daughter Jeunesse, people who took precedence in his life.

A man of firsts, Reg, along wife his wife, an ex-ballerina, put together a new style of posing incorporating the kind of artistry her craft demanded. Back in the ’60s bodybuilding posing routines were stolid and not overly entertaining, but Reg’s new style, with fluid transitions and gracefulness of movement combined with classical poses, hit on. It is now commonplace. Reg was also the first man to combine massive strength with acting ability, good looks and charisma. 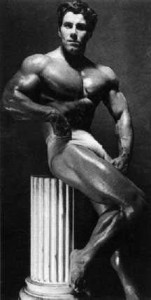 Reg Park
How many bodybuilders can you think of who have shared the bodybuilding stage at one time or another with Steve Reeves, Dave Draper and Arnold Schwarzenegger? Once again, Reg Park stands alone, this time as being the only bodybuilder ever to have competed against all three of these champions.

Given his wide-ranging contribution to bodybuilding’s evolution, it is not surprising that many bodybuilders the world over have been positively influenced by Reg Park.

Those who trained with him knew Reg to be a warrior in the gym and learned directly from him, those who read about him in the magazines were inspired by his words and achievements and those he competed against knew they would have tremendous fight on their hands. A legion of younger competitors and bodybuilding fans have also been touched by Reg Park in so many ways, showing that what he has gifted bodybuilding lives of today. 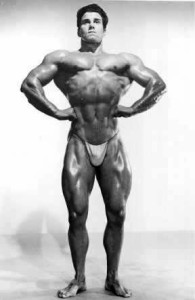 Reg Park.
In this article, fans and competitors alike share their thoughts on, and pay tribute to Reg and describe how he has influenced them as bodybuilders.

A Tribute By Samir Bannout
Scroll to top