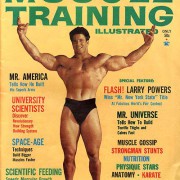 Reg Park has been a friend of mine for over 35 years. Reg Park has a heart of Gold and is a down to earth, good person. Success and fame never went to his head.

When I started publishing Muscle Training Illustrated back in 1965, I wanted Reg Park to be on my premier cover. Today this cover issue of MTI brings in the highest dollars from e-bay sales.

In 1972 I invited Reg Park to guest pose at my WBBG Pro Mr. America Contests. Reg put on a great posing exhibition. He and his lovely wife Marion, a famed Ballet Dancer, flew in from Johannesburg, South Africa. I made arrangements for them to stay at the Waldorf Astoria in New York City.

Reg Park said he would like to instead stay at a smaller Hotel, near Coney Island, in Brooklyn, New York.

As a kid he always wanted to eat Nathan’s Hot Dogs. So we all went together and we had a ball, eating hot dogs and fried shrimps. He would rather eat there than a fancy restaurant.

When I heard Reg had skin cancer, I called and spoke to him and his wife Marion. Reg is a true champion and will fight this dreadful illness.

I am proud to call Reg Park a “Mensch,” which means in Jewish, a truly good person.

A Tribute By Steve Michalik
Scroll to top