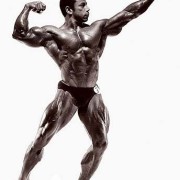 Reg Park’s body speaks for itself, but most people are unaware of his humane qualities and of his leadership abilities. Both of these assets have made him the husband and father he has been all these years to his wife Marion and to his son Jon Jon. These qualities worked to my own advantage while I was a guest in South Africa when he acted as host. Yes, Boyer Coe and I toured Reg’s country before the “revolution” and before Nelson Mandela’s influence was felt in order to bring racial integration there.

Well, let me tell you that Reg Park, quietly and in his dignified manner, made certain that all of Boyer’s and my public appearances were done before mixed audiences and made certain that I, as an African-American, would not experience the embarrassment or discrimination.

Reg was always the man to scope the next scheduled venue on the tour and it inspired me to nickname him “Scout Master!” He took his new name in the right humorous spirit as it proved to lighten things up for all of our party. I, personally, have to add to his long list of bodybuilding Titles, the Title of Scout Master.

A Tribute By Mauro Di Pasquale
Scroll to top