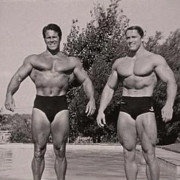 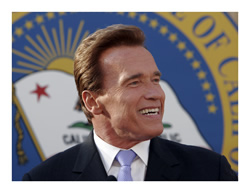 When I think of everything Reg Park meant to me over a friendship that lasted more than 40 years, I am still blown away.

I was a 15-year-old farm kid growing up in Austria when I was first inspired by a bodybuilding magazine with a picture of him on the cover from one of his Hercules movies. My life was never the same.
He was so powerful and rugged-looking that I decided right then and there I wanted to be a bodybuilder, another Reg Park. I could not have picked a better hero to inspire me.

Reg went from bodybuilding to the movies. He became a smart and successful businessman, and he was the first person who gave me a glimpse of what my life could someday become if I dreamed big and worked hard. 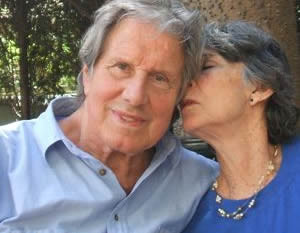 Thank you to the many, many people from all over the world who sent me their prayers and praises during my recent illness. I am humbled and overwhelmed by your support and caring, and again, I thank you.
With love from Reg.

I devoured every article about him I could find in German. If they were in English, a friend translated them for me. I pasted his pictures all over my bedroom wall. I watched his movies over and over again. I learned his training regimen and tried to copy everything he did.

Inspired by his example, I was working harder and harder and starting to have great success as a young bodybuilder. Then in 1966, in a gym in East London, my greatest dream came true.
Wag Bennett, whose gym it was, arranged to have Reg and I work out and pose on the same day.

I will never forget it. It was a cold winter day. Reg had just arrived from South Africa and he looked so classy in neatly pressed slacks, a dress shirt and a thin sweater. I had a million questions to ask him, which was pretty hard to do because my English was not very strong back then.

But it didn’t matter. We bonded right then and there and found a way to communicate. And meeting him was a real wake up call. I had a great work ethic and trained harder than any of my bodybuilding friends. But when I saw how hard he trained and how much weight he used, I was stunned. He was at a whole other level, and I knew if I wanted to be a true champion, I would really have to step up my workouts.

Then I was lucky enough to do some exhibitions with him in England and Ireland and we became great pals. He took me under his wing and became a real father figure and mentor. He was so generous with his time and knowledge, telling me everything he knew about training, diet, discipline, how to work all the different muscles. It was like a graduate seminar in advanced bodybuilding. And the next thing I knew Reg invited me to come and stay with him in South Africa, to train, put on more exhibitions and just hang out. 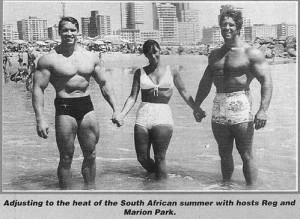 Can you imagine what that felt like to me? I had finally met and worked out with my boyhood hero, and then he invites me to come stay with him and his family. This was as big a thrill to me as making my Terminator movies. Hanging out with Reg, my boyhood idol’it was surreal. I had to pinch myself to make sure I wasn’t dreaming.

I realized very fast that I was not dreaming because Reg didn’t let me sleep. He woke me up every morning at 4:30 for breakfast so we could get to the gym by 5 for our first two-hour workout of the day. I will never forget those 1,000-pound calve raises he made me do first thing in the morning. And everyday it was the same breakfast. Corn flakes. Some people sprinkle sugar over them. Reg covered his with milk and protein powder, then it was off to the gym.
When we weren’t training, we were hanging out at his pool, going to dinner with his amazing wife, Mareon and their two fantastic kids, Jon-Jon and Jeunesse. They made me part of the family and that’s how Reg inspired me in ways that had nothing to do with bodybuilding.
I saw what a loving, doting father he was to Jon-Jon and Jeunesse. I saw what a devoted husband he was to Mareon, his incredible wife of more than 50 years. She treated me like another son, and she is a jewel to this day.

Arnold Schwarzenegger and Reg Park I didn’t grow up in that kind of environment and it had a tremendous effect on me. Seeing him so free with his hugs and kisses and affection, I realized that’s the kind of father and husband I wanted to be. By example, he showed me what a truly full and successful life looked like.
And no matter where our careers took us, we always stayed in touch. And he was the greatest support and friend. Whenever I won a competition, later in my life when I made movies, and certainly when I was elected Governor of California, Reg was always there with a phone call or a warm letter. Always to pump me up and congratulate me. To inspire me to do even more.
I know he was proud of my success. He had an awful lot to do with it, and I am very happy that he got to experience so much of it with me.

It was a special highlight for me to see him each year at the Arnold Classic, and he always had a ball. He loved how it grew and became such a big event. And at the Arnold Classic 2007, I got another great thrill when I presented our lifetime achievement award to the man who has meant so much to me over my lifetime.

I will always miss and love Reg, as will the worldwide bodybuilding community and anyone who was lucky enough to know him.
Arnold Schwarzenegger

A Tribute By David Robson
Scroll to top